Can greener business benefit both planet and profit?

The latest IPCC report is on top of the agenda in Norway, as in many other countries. Unsurprisingly, accelerating the green shift is also the main topic of conversation before the national election on September 13th. What might be surprising though is the result of Cognizant’s latest research: that green business is also good business.

Is there a shift towards considering sustainable business practices as an economic imperative rather than a compulsory one only? To find out, Cognizant’s Center for the Future of Work partnered with MindForce Research to survey 1,000 C-suite and VP-level business leaders across North America and Europe. The findings are published in the report Green Rush: The Economic Imperative for Sustainability.

Among other things, the report states that the impact of sustainability investments goes beyond regulatory compliance – a majority of respondents believe they’ll also increase sales and improve brand reputation. According to Shahid Skar, Country Manager for Cognizant Norway, this is happening in Norway right now.

“Sustainability is increasingly linked to business gains. For example, in fish farming, one of our major industries, there is an immediate connection between sustainability and product quality. Here, an increased level of digitalization helps drive more responsible aquaculture.”

This can be seen at Mowi, among others. The company uses remote real-time control of farms, AI and underwater IoT devices to safeguard fish health. Recently, the independent, non-profit C4IR Ocean foundation was also launched in Norway. The initiative aims to work towards a productive and healthy ocean through the sharing of ocean data via its platform.

Like in fish farming, data and increased digitalization are at the very heart of any efficient, optimized process. The Norwegian Government thus considers it increasingly important to make use of digitalization in the green shift in its strategy for developing a green, circular economy.

“Many companies aren’t aware of their carbon footprint across the value chain. Technologies such as IoT, AI and Machine Learning are about gathering data, analyzing it and using it to make better-informed decisions in real-time, all of which are essential parts of steering towards more sustainable solutions.”

Norway is ahead in many sustainability areas, regularly making it to the top 10 lists, such as Yale’s Environmental Performance Index. The usage of electric cars and buses is widespread and there is a strong focus on efficient production of more environmentally friendly batteries.

At the same time, there is no secret that oil and gas has played a major role in the Norwegian economy. However, according to Shahid Skar, the expertise gained from this sector will be vital for the development of new industries and technologies such as carbon capture and storage, offshore wind and hydrogen.

“Increased efficiency through digitalization has been the main focus for a long time within the energy sector. Surveillance drones, automation, and self-learning systems that help you constantly improve are now in use at many of the major companies within this sector and these are technologies that can be utilized in other industries too. The competence built up in here can be reused for sustainable energy sources like offshore wind. For example Aker Asa investments with Aker Horizon".

This year, Cognizant is sponsoring SailGP, the global sailing league, and its initiative to raise awareness around clean energy. Cognizant will leverage digital transformation and software engineering expertise to improve audience insights, enable data visualization and improve the fan experience for the 257 million SailGP viewers worldwide.

Cognizant is also the official digital transformation partner to Aston Martin’s Formula one team. With the help of AI, cloud, IoT, and digital engineering, the car’s design can be optimized digitally before production starts. Among other things, digital twins and simulations help to reduce energy usage and waste.

“All the experience gained in for example the SailGP initiative, like data gathering, sensors, AI, machine learning, and predictions that will help the boats perform optimally, can surely be applied to many other areas, such as offshore wind projects.”

According to the Green Rush survey, the uncertainty of ROI around sustainability efforts is the primary challenge for 74% of respondents, followed by a lack of strategic clarity and a lack of senior executive commitment. Any advice on overcoming these hurdles? First, you must realize that sustainability is about a huge cultural transformation.

“Sustainability work is like Cognizant’s own vision ‘Engineering businesses to improve everyday life’. It is a mindset you should include in your daily processes, across the company, and not view as a separate technology project.” 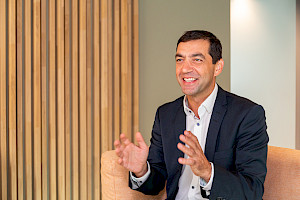 So where do you begin then? Well, the most important thing is that you start.

“My favorite quote, coming from the author Simon Sinek, says ‘Think big, start small – but start’. Be inspired by others, experiment, test, and make sure to get everyone on board. If you don’t do it, your company risk being outcompeted,” says Shahid Skar.

Learn more in the report Green Rush: The Economic Imperative for Sustainability.